All for Joomla All for Webmasters
June 27, 2019Master WebLife 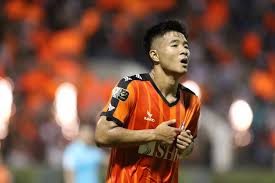 Contrary to the bloody style on the football field, Duc Chinh is extremely sociable and friendly. There are many interesting stories about the Muong ethnic boy.

Ha Duc Chinh is often called by his teammates as the “Black” Chinh. This nickname comes from the player’s tanned skin born in 1997.

Duc Chinh was not overestimated by Park Hang-seo coach when he concentrated with U23 Vietnam to prepare for U23 Asian champions. However, the effort in training and competition to help the striker who is playing for SHB Da Nang gradually score points with the Korean teacher. Two assists in friendly matches against Ulsan Hyundai FC and Palestinian U23 helped the 20-year-old player named Park enter the Asian U23 UEFA Champions League 2018 list.

Apart from football, Chinh “black” loves to swim. Phu Tho’s childhood was associated with swimming sessions across the river to go football.

Ha Duc Chinh has a passion for singing. However, his voice is always compared to his comrades’ Chai-en character in the Doraemon comic.

Favorite “black” brand Mizuno. The striker who is playing for SHB Da Nang chooses to use Mizuno shoes for training and competition. Recently, the 20-year-old also participated in advertising for sports firms from Japan.

Chinh admires Real Madrid White Vulture. Meanwhile, the idol of the 20-year-old boy is none other than Portuguese superstar Cristiano Ronaldo.